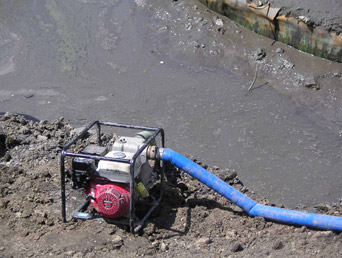 Of the many cities affected by Hurricane Matthew in the state of Florida, St. Augustine stands out among them. The coastal town and its surrounding areas were badly hit by the hurricane and the storm surge flooding that accompanied it. In some parts of St. Augustine, floodwaters rose up to 2.5 ft above ground level. More than 1,000 of the city's historic, colonial structures were damaged in the downtown area, and less than 40 miles to the south, near Flagler Beach, concrete segments of Florida State Road A1A were completely washed away.

Although Hurricane Matthew moved away from the U.S. coastline on October 9th, and some communities have completed the remediation process, the need for pumping solutions in St. Augustine is expected to last well into 2017. An equpiment rental company based in St. Augustine, is at the forefront of meeting the constant pump demand for customers in the flood-ravaged area.

"The cleanup effort is still going strong," said manager of the rental company. "I don't think many people realize that unless they live right where the flooding occurred. It's especially difficult in St. Augustine, where high tides can still exacerbate problems. The combination of floodwaters and rising tides can sometimes make a bad situation worse."

For the company, the first step of the remediation process in the wake of Hurricane Matthew was the removal of floodwater from residential properties.

"In the immediate aftermath of the storm, our primary focus was moving water out of pools and ditches," he said. "It was a nasty situation where overflowing sewage combined with stormwater-the resulting slurry mostly wound up in homeowners' backyards, filling up their in-ground pools and creating a haven for mosquitos. We needed to get the water out as quickly as possible, and we found success on those job sites with Tsurumi's gas engine centrifugal pumps and electric submersible dewatering pumps. For example, the gas engine centrifugal pumps are light enough for a two-man crew to easily maneuver around the job site and they move up to 8220 gph." 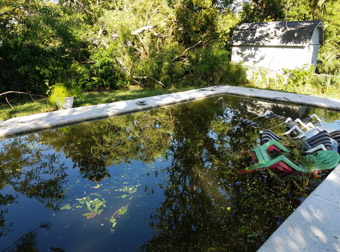 While the intial neighborhood dewatering is mostly complete, there's still much work to be done to complete the second phase of the rental company's clean-up efforts: shoring up damaged marine infrastructure along the coast.

"We'll be fixing seawalls and docks in this area for a long time to come," he said. "Tsurumi's engine pumps also work great for these applications, especially in the case of seawalls. By hooking a jet pipe to the discharge side of the pump, we can take water from the ocean and use the water pressure to dig a hole. Then, we put a pylon in the hole and jet it to the proper depth. It's a task that requires constant movement of water. We've got a long way to go, so having reliable pumps on hand is a must."

The frequency of flooding across the U.S. has risen in the last decade. To bolster remediation efforts in the wake of these floods, Tsurumi Pump has developed a storm preparation protocol to monitor developing weather patterns that may pose a threat to a given region. After Tsurumi's management team makes a joint decision, the company contacts rental professionals and distributors in flood-prone areas to gauge what the demand for certain types of pumps might be if weather patterns become severe. Large shipments are then sent to the region within hours of making a decision.

Tsurumi's monitoring and logistical efforts helped the situation in St. Augustine, and the pump manufacturer's inventory enabled it to get a shipment of gas-powered centrifugal pumps and electric submersible pumps into town before Hurricane Matthew hit.

"We typically keep an eye on storm paths, and Hurricane Matthew was no exception," said managing director of Tsurumi (America) Inc. "We don't shy away from investing in our inventory, which keeps us prepared when we see threatening weather patterns moving into an area like St. Augustine. We were able to send a shipment of pumps immediately to Florida after making our decision."

He also stressed the importance of staying in contact with distributors after a storm has passed.

"In general, we try to keep in contact with distributors after a storm hits to make sure the community's needs are being met," he explained. "If power outages are rampant, for example, we'll want to get more gas engine centrifugal pumps and generators to the area as quickly as possible."

The manger of rental company added that Tsurumi's quick action in shipping the pumps enabled the rental company to start serving its customers right away.

"Goverment officials let us back on the island on the Saturday after the storm had passed," he said. "We were able to begin getting pumps to our customers the very next day. We were fortunate to receive the shipment when we did-it's refreshing to work with a company that keeps an eye out for its distributors like Tsurumi does."